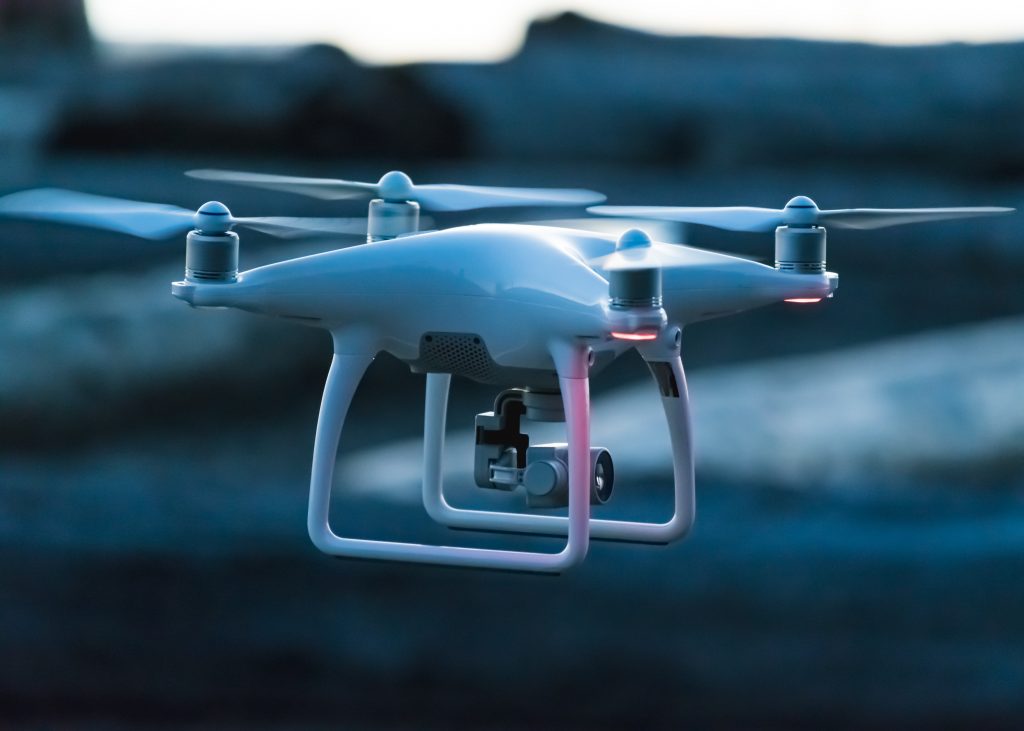 Drone technology is a growing concern as the drone industry continues to expand at an unprecedented rate. From tactical surveillance to monitoring oil rigs, drones are being used in an ever-increasing number of commercial and non-commercial applications. The use of drones has also sparked debates about personal privacy, with some arguing that they should not be allowed at all in certain locations.

In this article, our Ballistician, Paul Bradley, discusses the differing threat levels that drone technology can pose, and the most effective counter-drone technology methods and strategies that can be used to keep drones away from sensitive locations.

The threat of advancement

I felt a mixture of wonder and concern as I watched a large drone display a few years ago. The drones moved in a swarm-like fashion, lighting up the night sky with various patterns, images and words. The complexity and accuracy of each movement was incredibly impressive, and I was amazed at how far the industry had come.

The defence industry part of my brain, however, had some darker thoughts.

What if each drone had lethal capabilities? This concept is by no means new. In 1839, Austrians used balloons to deliver explosives to their enemy. Of course, the wind played a major role and some of the devices blew back at the Austrians, but nevertheless the seed of an idea was born…

The term “drone” is quickly falling out of favour and is being replaced by UAV (unmanned aerial vehicle) or UAS (unmanned aerial system). I use the term drone in the title and foreword as most people understand it and may not yet heard of UAV/S.

The term ‘UAV’ refers to the drone itself, but the term ‘UAS’ incorporates the UAV and the entire system that controls the UAV. This could include the person or team at the controls, the transmission system, GPS, and even the software used to programme the device.

Minor/Antisocial – These make up the bulk of UAV incidents and generally involve amateurs operating hobby drones in an improper manner. They may be flying too close to people, buildings, or sensitive areas, such as airports or military bases. These incidents are becoming increasingly numerous and are often a waste of police time.

In 2019, between January and April the Metropolitan Police dealt with an average of 41 incidents per month. Minor UAV threats can generally be dealt with through a simple discussion with the operator, who is likely to be in plain sight as they keep an eye on their device. Intervention may be required through counter drone technology if the device’s actions present a risk to life. An amateur operator flying a drone over an airport presents obvious and immediate danger, despite the operators lack of malice.

Hostile – These incidents vary in their degree of hostility, but share a common theme in that the UAV operator has bad intentions. This may make it harder for police to deal with the operator, as they have likely taken steps to conceal themselves.
The most concerning scenario would be that of hostile reconnaissance. Drones can be used to map areas for other criminal acts, such as stalking, burglary, and terrorism. Hostile operators are also able to use drones to disturb infrastructure and essential services.

A prime example of this was when a UAV or UAVs were used in a malicious manner to fly over Gatwick Airport. The entire airport had to be shut down as a result, and this took up a huge amount of police resources. The operator has yet to be caught.

Another example of one of the most prevalent, hostile uses of UAVs is as vehicles delivering contraband to prisoners. UK prisons record over 200 incidents per year in which UAVs are being used to deliver drugs, mobile phones, money, and even weapons.

Lethal – These incidents are becoming increasingly frequent in warzones and in areas in which terrorism and serious organised crime are rife. Store-bought UAVs can be modified to function as explosive devices or can be programmed to drop munitions, such as grenades or mortars. There have also been instances of drones being modified to mount small arms and fire them in flight.

Modified drones are comparatively cheap and widely available. The drones themselves, or the modified parts, can be purchased anonymously. A modern store-bought UAV, purchased for around £5000, could carry around 4 kilos of weight and could have a range of several kilometers.

Drones can be operated via a screen, goggles, or GPS, negating the need for the operator to have a direct line of sight on the UAV, allowing him/her to easily conceal themselves. Software can be used to allow one user to control multiple UAVs. They can also be programmed to undertake tasks and return using AI, with no further need for operator input following their launch.

Detection -The first stage of countering a threat is acknowledging its presence. There are various systems available to aid the detection of UAVs within a specified area. Modern UAVs can be launched close to the area you are protecting and can travel at 40-50mph. The time between the initial detection and the deployment of a counter measure is vital. A UAV could be overhead in a matter of seconds. A drone launched 1km away could be positioned at your location in just 45 seconds.

Electronic Jamming/disablement/Hijack – Following detection, the fastest method of counteracting a rogue UAV would be a computer initiated electronic counter measure. Failing this, a counter method initiated or manually operated by a person would be the next best option.

If these measures are successful, they can work quickly and efficiently. There are, however, downsides to these methods. A jammer powerful enough to block inputs/outputs to or from a UAV can also jam other signals in the area. In a busy urban area, there may be hospitals, airports, or other locations in which signal jams might have an extremely detrimental effect. For this reason, high level permissions are often required to consent to the deployment of such methods.

Devices can be employed to electronically disable or even hijack and take control of rogue UAVs. These methods are very well adapted to dealing with unmodified UAVs. However, there is always the possibility that someone could modify existing software to get around these methods. Take the computer virus industry, for instance. Companies spend millions of dollars attempting to secure computer systems, but a kid with a computer and a lot of spare time could work to find a new vulnerability.

Kinetic – A UAV can, of course, be countered if it is physically damaged or captured. There are a variety of ways one could do this. The most commonly suggested method is to simply “shoot it down”. This is a little more complex than people may think. First and foremost, it is incredibly difficult to hit rapidly moving targets in the air with a standard rifle or pistol round. There is a reason that clay shooters select loads of small shots, which spread out as they travel – it greatly increases your odds of hitting anything.

Primetake have conducted tests with standard clay and game loads and have found them to be largely ineffective against drones on any range beyond 10m. Smaller UAVs would be moved in the air when impacted, robbing the shot of its kinetic energy. Larger commercial drones are built ruggedly enough to be impervious to the light and comparatively slow (due to velocity decay/poor drag coefficient) sporting loads. The only solution, if shots must be used, is to beef them up to a size that would be more effective, like 00 Buck. Nine pieces of shot flying through the air would still make for an incredibly difficult shot, which brings the possibility of collateral damage into play. Most counter UAV scenarios will take place in populated areas. Blasting projectiles up into the air and allowing them to drop in random places, while maintaining lethal kinetic energy, is not a favourable plan in an urban environment. Such projectiles also risk leaving foreign object debris behind when used on Airfields.

As there is no single solution to defeating rogue UAVs, one must think of protection in terms of layers. A perfect layered defence would rapidly detect encroaching UAVs. It would then respond with one or more electronic counter UAV methods, before ending with a long-range and short-range Kinetic solution.

Of course, timing is crucial. The electronic methods would ideally be automated and triggered by the detection system. The long-range kinetic option would also preferably be automated. The short-range option would function as a last line of defence, and could be deployed while the automated systems do their work.

Primetake offers a 12g solution which covers the short-range kinetic option. Our DB5 round can be used in virtually any 12g shotgun by anyone who has basic marksmanship and weapons handling principles.

We would suggest a multi shot semi-auto or pump shotgun, as this allows rapid shots to be fired, which greatly increases hit percentages. We also recommend using multiple shooters, as they can engage drones swiftly and take on numerous drones if required.

The DB5 round exits the barrel as a slug, but rapidly separates into 5 sections linked by Kevlar. The DB5 round spreads out to 1.5m at around 15m from the muzzle and continues to a maximum distance of around 100m. The realistic maximum distance for drone engagement is around 80m. when the DB5 round hits the UAV, it entangles it and causes catastrophic damage to the body and working parts via the separated slugs. We generally see the leg sections or propellers break.

When the round misses a UAV and falls to the ground (if fired at a 20 degree angle or above) it does not retain enough velocity to cause serious damage to infrastructure or people. It remains intact and is easy to recover due to its bright coloration. It is highly cost-effective when compared to other counter UAV measures, which means end users can train without breaking the bank.

See the DB-5 in action here.

As always, if you have any questions about the DB-5, counter drone technology, or specialist/custom ammunition, please get in touch with a member of our team at sales@primetake.com.

Back with a bang! New product demo videos of Primetake’s Stun Grenades

During the recent delivery of Primetake products into South East Asia, Ade Newberry from AN Precision Ltd not […]

Question: When training for waterborne or maritime interdiction, what do you think is going to make the training […]